Now, three months after his arrest by the enforcement directorate in a money-laundering case, Indiabulls Housing Finance and Indiabulls Commercial Credit Ltd have threatened to taken possession of the properties. The loan default against these Mumbai properties is about Rs 650 crore.

Rana, his wife Bindu and their family-controlled firms mortgaged these upscale properties in lieu of loans from Indiabulls. The total outstanding balance to be paid back by the Ranas to Indiabulls is around Rs 1,200 crore. Early this week, Indiabulls issued a public notice, stating that the borrowers had failed to maintain financial discipline towards their loan.

Asking the Ranas to pay up within 60 days, Indiabulls said it will be entitled to take possession of the mortgaged Mumbai properties after the deadline. A spokesperson for Indiabulls said, “We have already received Section 9 in our favour from the Delhi high court, directing the party not to create third-party rights. Now we have initiated the Sarfaesi (Securitisation and Reconstruction of Financial Assets and Enforcement of Security Interest Act) process. We are well collateralised and expect to recover our Rs 1,200 crore loan in the forthcoming auction of these properties.” 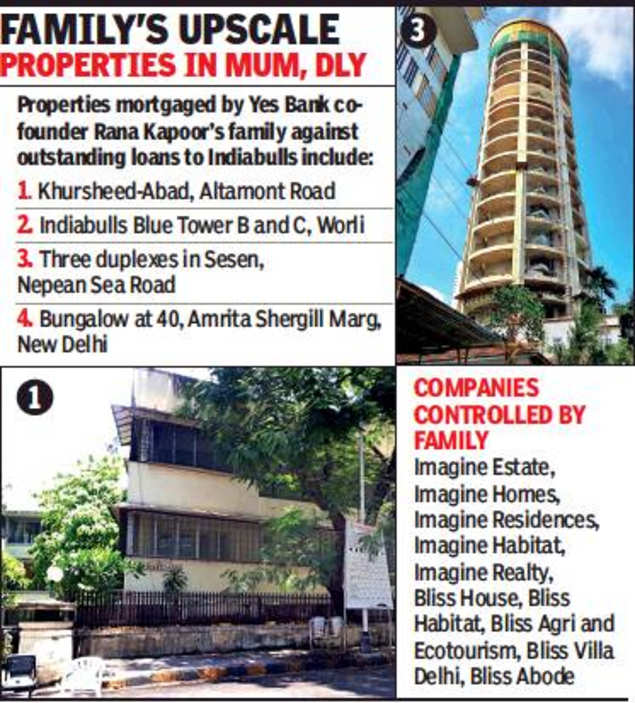 The Altamont Road property is a two-storey residential building called Khursheed-Abad, which the Ranas purchased for Rs 128 crore two years ago. The building contains six flats of built-up area 14,811 sq ft and is next to industrialist Mukesh Ambani’s residence, Antilia. The Ranas had planned to use it as their private residence. At Nepean Sea Road, the Ranas and their family-owned companies booked three sprawling duplexes in an under-construction skyscraper called Sesen, touted as an “uber luxury residential project”.

In 2017, the Ranas had borrowed Rs 375 crore from Indiabulls Housing to finance the purchase of a bungalow in New Delhi’s upscale Amrita Shergill Marg enclave. The property’s owner, industrialist Gautam Thapar, had pledged it with Yes Bank. Thapar’s Avantha Realty had defaulted on a loan from Yes Bank and the property was acquired by the Ranas.

The companies floated by the Ranas mainly invested in real estate. According to the ED, RAB Enterprises India belonging to the Ranas is an investment company with a paid-up capital of Rs 90 crore. Under RAB, there are ten property-owning companies with loans from Indiabulls against mortgage of properties as security. During his interrogation, Rana Kapoor told ED that all loan interest payments are “fully current to date”.

The family-owned firms are controlled by Rana’s wife Bindu and their three daughters, Roshini Kapoor, Radha Kapoor Khanna and Raakhee Kapoor Tandon. The ED is investigating loans given by Yes Bank worth Rs 20,000 crore during Kapoor’s tenure to various companies, including ADAG Group, DHFL, Essel Group, Cox & Kings, Radius Developer, Sahana Developers, Omkar Group, Avanta Group, and Sumer Group. It is alleged that most of these loans went bad and Kapoor received kickbacks from those defaulters in the form of investment-loans to companies associated with the Kapoor family. ED is currently investigating these loans. Yes Bank had also given loans to Indiabulls. Indiabulls said it had repaid all its pending dues to the bank.