Skip to content
GURUGRAM: There are 82 housing societies in Gurugram and Faridabad that are dependent on diesel generator sets for electricity, the state power distribution utility has informed the Environment Pollution (Prevention and Control) Authority (EPCA) through a survey report.

The revelation comes just four days before the Graded Response Action Plan (GRAP) kicks in across NCR, a move that will put a ban on the use of DG sets except for emergency purposes like in hospitals and schools.

Officials of the Dakshin Haryana Bijli Vitran Nigam (DHBVN), which conducted the survey, said that of these 82 condominiums, 26 are in Gurugram city itself while three are in Faridabad. These societies, home to at least 2 lakh residents, can’t do without generators as permanent power connections are yet to be set up because the developers have not fulfilled certain norms. So, if gensets are banned from October 15, these societies will have no means of power backup. However, many of these flats are yet to be occupied.

DHBVN has given notices to all these developers to submit compliance reports by October 15. Last year, a similar survey by discom had found 97 condominiums heavily dependent on diesel gensets. Though these societies were given a year for getting connections, only 15 could manage to get permanent supply. DHBVN agreed that seven more connections were held up because of delay on its part. Officials said the issue would be sorted soon. So, if seven societies get the connections, it would bring down the number of condominiums dependent on DG sets to 75.

The survey by the power utility followed a directive by EPCA to submit a status report on the number of societies that were still using generators. The pollution watchdog is slated to take on call this week on “emergency services” where the use of gensets can be allowed. “We have carefully studied the issue and submitted a status report to the EPCA for evaluation. All protocols have been met at our end. Now, there are 82 condominiums across Gurugram and Faridabad that are dependent on DG sets. They have temporary connections, but they still need gensets for power supply,” said Vinitha Singh, chief engineer (smart grid) in the Delhi circle. 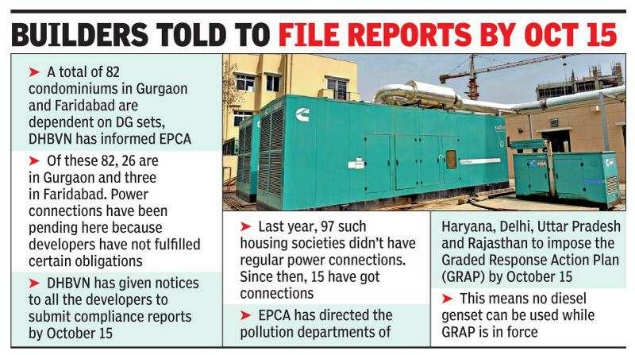 She pointed out that developers such as DLF, Unitech, Ansal and Ardee were among the 82 that were yet to take permanent power connections. “There are 75 residential societies between sectors 58 and 115 that are still using gensets. For DLF-The Camellias, which also does not have a permanent connection, we have also asked HVPL to provide electricity. DHBVN was supposed to get more than Rs 1 crore from each builder for electricity connection. But the money is still pending,” Singh added.

Officials in the Haryana State Pollution Control Board (HSPCB) said the EPCA would take the final call on the fate of residents living in these 82 societies. “It will evaluate the status this week and take a decision,” said S Narayan, member secretary of HSPCB.

On October 8, EPCA chairman Bhure Lal had directed the pollution departments of Haryana, Delhi, UP and Rajasthan to impose GRAP by October 15. Bhure Lal had specified that the use of diesel gensets would be banned in Delhi, Gurugram, Faridabad, Ghaziabad, Noida and Greater Noida except for emergency purposes.

When a similar plan was implemented last year, the power utilities of Haryana and UP had sought time till winter 2020 to supply seamless electricity from the grid, which would obviate the need of diesel gensets. While developers are yet to fulfil certain norms so that power connections can be granted to their projects, the discoms, too, have failed to provide seamless supply in some cases.