CHANDIGARH: Employees of the UT administration have turned down a proposal of Chandigarh Housing Board (CHB) to build a 11-storey tower under the UT employees housing scheme 2008.

The board had proposed to construct a 11-storey tower with increased floor area ratio (FAR) and charge only for the built-up area of the flat from the allottee instead of the total area of the project, which includes land for road and green belt.

Dr Dharmender, general secretary, UT Government Employees Housing Welfare Society, said this proposal will further delay the project. Besides, the UT plans to adjust around 4,000 allottees in a particular area by constructing an 11-storey tower, which in future will create mess and employees will face a number of problems like parking. They had recently met with the CHB officials and conveyed them that they are against the 11-storey proposal, he added.

The employees are in favour of earlier proposal of ground plus five storeys and will soon hold another meeting with CHB and UT officials, he added.

Last year, after opposition by employees, the administration had decided to reconsider high prices of flats under. The employees had also moved the Punjab and Haryana high court over UT’s delay to hand over flats. 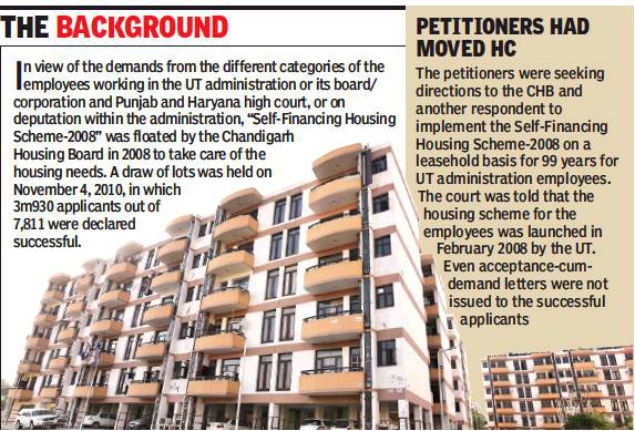 Last month, on the directions of the Punjab and Haryana High Court, a meeting through videoconferencing was held under the chairmanship of Union home secretary Ajay Kumar Bhalla. After deliberations to resolve the issue regarding rates of flats, it was decided that the calculation of rates be made again for different categories by applying various factors like FAR, collector rate and plot area in consultation with the representatives of petitioners of the scheme.

The CHB last year had finalised a three-bedroom hall kitchen (BHK) flat for Rest 1.76 crore, Rs 1.35 crore for two BHK flat, Rs 99 lakh for one BHK flat and Rs 58.07 lakh for one BHK (EWS) flat. The CHB through a public notice had asked all successful applicants of the scheme to give their consent within 21 days for payment in five instalments with applicable interest.

A total of 73.3 acre land was earmarked for the construction of 3,930 dwelling units for the employees. Out of which, 11.8 acre was already in the possession of the CHB.