GURUGRAM: Around 100 villas, costing several crores each and sold years ago, have now come under the government’s scanner for alleged violation of norms. Located off the Delhi-Jaipur highway and spread across 22 acres in a quiet neighbourhood, Mittal’s Royale Orchards is home to around 100 families.

The department of town and country planning (DTCP) started digging its decades old records after a group of residents lodged a complaint on the chief minister’s portal, alleging lack of basic civic amenities.

Days later, the DTCP filed a report on the portal, saying that the project had come up on land that had been categorised as an agricultural zone in the 2031 development plan. It also said it had not been able to find any record in its office that proved that the developer had taken all the required permission for building the 100 villas.

“We have received the complaint and our officials will visit the site soon. Action will be taken if there is any violation of norms,” said RS Batth, the district town planner. He added that a notice would be issued to the developer soon.

There is no clear law that defines the development of colonies in areas out of “controlled areas” or those not mentioned in the DTCP’s master plan. Batth explained that an area comes under the DTCP’s purview only if it is categorised as an “urban” or “controlled area”. He added that if some construction already exists in such an area, the owner of that particular property will have 10 years from the date of notification to conform to the zoning plan.

For instance, if there is a farmhouse on a piece of land that is later notified as an open area, the building cannot exist there after 10 years of the notification. “In this case, we have to check for the zoning plan of Bhora Kalan according to the development plan,” said Batth. 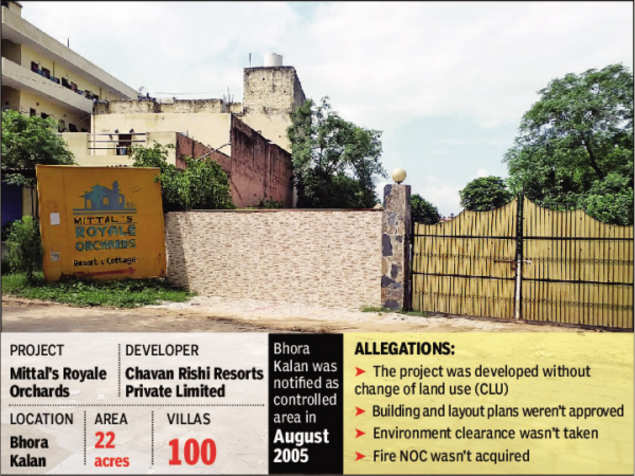 Sources said this was the first such complaint against Royale Orchards, which was developed by Chavan Rishi Resorts Private Limited in the early 2000s. According to the residents, who alleged lack of basic amenities, the sale deed given by the builder claims that a detailed survey had been carried out by the DTCP in 2005 to ascertain the status of the project, which already existed before the land was declared a controlled area.

The DTCP’s survey report, the developer claimed, said the buildings had been completed before the notification for controlled area was issued in August 2005. “It is hard to even imagine that a project of this magnitude is approved by the DTCP through a survey report without a change in the land use, without building or layout plans, without drawings or environmental clearances, without a fire NOC or drinking water facility or even an STP clearance,” said Kuldeep Kohli, legal adviser to the residents.

The complaint has prompted the DTCP to dig out its old records and ascertain if the required permissions were sought.

Kohli said the lack of basic amenities was causing a lot of problems for the residents, all of whom had invested crores in the project.

“Yes, the residents are dependent on tankers for their water supply. The colony has no proper electricity connection. Despite that, it has been imposed a fine of Rs 2 lakh,” said Kohli. The lawyer added that the developer had been charging Rs 5,000 a month as maintenance.

A representative of the builder claimed that the colony was developed in early 2000s and no permission was required then as the area had not been notified. “When the area was notified as a controlled area, the DTCP had carried out a field survey. All the construction in the colony was mentioned in its records,” he said, insisting that there had been no violation of norms.